Lets start with the results 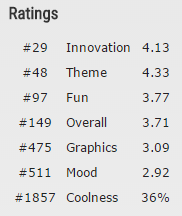 Given that I only worked on the game a few hours every night, after the girls had gone to sleep, I have to say I'm pleased! I can only wonder how much better it would have been if I had the full 48 hours!

I used Unity as dev tool, and pretty much nothing else. The graphics are only squares, and there is no sound or music.

I spent a lot of time on the feel of the game, and posted a lot of animated gifs on Twitter, that got a lot of positive response.

I struggled a bit with a good system for creating enemy waves, but once that was in place I realized I could easily use it to generate random levels - which I do if you manage to get by the first boss in wave 6.

Even managed to squeeze in boss fights

After I released the game I got some feedback:

But overall I'm very pleased with how my entry turned out, and I can't wait to participate again!