As game engine I used a framework called PushButton Engine. I’ve actually been curious about it for the past year but haven’t found the time to actually dive in to it (until now). The engine don’t seem to have any support for tiling/scrolling backgrounds, so I had to modify it a bit before the competition started, but luckily that’s allowed as long as you share the code before you start. I will give my impressions about PushButton Engine in another post, but briefly I have to say that I really love their component-based concept. Expect more on that topic!

To create the levels I used a bitmap, where I mapped a color to a specific tile. In that way I could just “draw” my levels in photoshop. This is the actual level (its pretty big), and each pixel is translated to a tile which is 32×32 pixels.

The map used to generate the level

I have to say I’m satisfied I managed to get my entry submitted, given a completely new game engine, although I did create the level very late (just a few hours before the deadline) so the game did not really turn out the way I had in mind. The passages should have been a bit narrower and the enemies should shoot more often. As it turns out you can just simply fly past the enemies…

But it was a really fun competition, and I will definetly participate again!

Edit: The result from the competition was released today. It shows that my game got at an honorable 98:th place (out of 509 entries)!!! What was even more surprising to me was that the game was rated as number 9 in the graphics category!!! :-O. Amazing! This has been really really fun, and I’m really looking forward to participate again!

This is the final result: 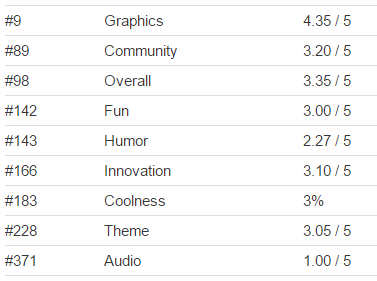