For the compo I was using a language called Haxe, with a cross-platform framework called NME together with my own previously built Entity system, Seagal Engine. This was the first time I actually built something with the engine, so it was my very first test run with my engine.

This was my full setup:

What turned out to be good:

And not so good:

The game has some potential, but I didn't manage to bring it out, and it turned out to be a pretty bad experience. A huge part of it was that I had a full, playable game so late that I didn't have time to tweak it. That the game did not turn out as I had imagined is kind of reflected in the scores, although they are not too bad: 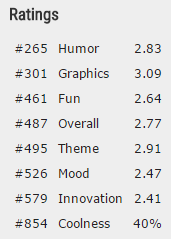 All in all, it was a great event. And very intense! I think about once (max twice) a year is as much as I can take, but I’m already looking forward to next time!