Haven't written about this in a while, but there is a ton of new stuff going on…

(oh, and those red dudes are not ascii… did some experimentation but did not really like it)

…more to come, I promise =D

Been a while since I worked on this one. But I have some very intriguing ideas, so I wanted to pick this up again. New features since last time:

Took a first step towards implementing shadowcasting, the ability to show a tile as lit/unlit/hidden.

To be totally honest, this setup of the generated dungeon doesn't feel very interesting to explore. But that's not my main concern right now. I'm just trying to get the very basic systems to work before moving on with the gameplay parts.

All right, in order to start doing something cool I need a to navigate in. RougeBasin to the rescue! They have a really cool tutorial on a BSP dungeon (Binary Space Partitioning, simply put: a node tree where every node has two child nodes). Link here

First step: Create a child node of the entire area. Then randomly split it vertically or horisonatlly (offset the split by a random amount) and add the two inner segments as childnodes. Then repeat for each child node.

Second step: Take all the leaf nodes, shrink them a bit and move them around by some random amount.

Fourth step (cheat): Turns out that connecting the parent nodes are a real hassle! In order to keep any kind of speed I did a cheat and drew corridors through the center of each sibling node. As long as I don't offset any room beyond the center coordinate the corridor will pass through a room.

This was fun, but getting step 4 up and running took way too much time. You don't want to lose too much momentum when dealing with hobby projects like these, and this is good enough for me to continue with the next exciting step!

Got a scrolling camera to work in tonights short session, showing a part of a bigger underlying map. Next up:

Today, by chance, I stumbled upon the free tileset section on Itch.io (https://itch.io/game-assets/free/tag-pixel-art), and I instantly fell in love with so many of them! I'm usually not a big fan of using random peoples stuff, but I think this made me change my mind!

I downloaded a few and started playing around with one of them, making ireggular semi-topdown floor tiles. I could easily integrate them since this is not a console at all, but a regular window I draw bitmap fonts into. Easy peasy!

But the very reason I started with this in ascii was to NOT having to bother with graphics… so even though it looks realy nice, it will have to wait for another project. 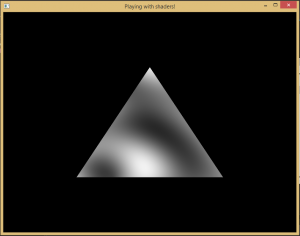